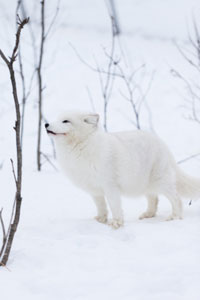 1. Is it cold ALL the time in Alaska?

Nope. Alaska is a huge state. Much of it is fairly close to salt water and the maritime influence keeps the weather fairly moderate. In the Interior and northern portions though, it does get bitterly cold during the winter (trapping season!) In some areas it is not uncommon for it to stay at 40 degrees BELOW zero for weeks on end. And temperatures of 50 to 70 below are not unheard of. That kind of cold can kill you; if you are trapping in it, you must be careful.

No. We have daily light cycles just like every other place on the planet! Obviously, at this high latitude, we have a lot more dark than light in the winter and a lot more light than dark in the summer. In northern Alaska, there are places where the sun does not actually rise for a couple of months, but even here there is some "light" from the sun below the horizon. And during the summer there, the sun does not set for a couple of months.

3. What species of furbearers do Alaska trappers catch?

We trap arctic fox, lynx, marten, wolves and wolverines that are not common species further south. But we also have lots of muskrats, ermine, mink, red fox, beaver and otter.

4. How the heck do you trap under those cold, dark conditions?

The logistics of trapping and trapline travel are much different than they are in more moderate climates. But the "concepts" and basic knowledge of animal behavior that you need are very much the same.

Once you learn some sets to make for each species and learn how to deal with the weather, you are set.

5. How do you bed a trap with all that snow?

Bedding traps in frozen ground is not an option in most of Alaska! Instead we bed them in snow. In most inland areas, the snow is very dry and makes a great way to conceal a trap.