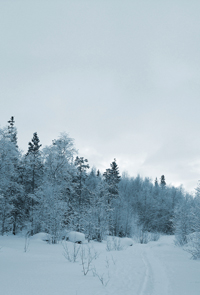 In the fall of 1972, three Fairbanks trappers, Norm Phillips, Sr, Terry Johnson and Fabian Carey began discussing forming a trappers association in Interior Alaska. There really had been no overt anti-trapping campaigns or pressure in the Fairbanks area, but the situation nationally was quite different. These three visionaries wanted to be ready when the issues came to Alaska and to Fairbanks. And they wanted to help their brother and sister trappers Outside. The best way to accomplish both these goals appeared to be formation of a trappers' association. They did some additional research and looked into the possibility of becoming an affiliate of an existing association.

More than a year later, on October 9, 1973 a meeting of trappers was called in Fairbanks. On that chilly fall evening, a large number of trappers (estimates vary) crammed into the lobby of the original ADFG building on College Road. The Interior Alaska Trappers Association (IATA) was born. The group was organized and chartered as Chapter 19 of Fur Takers of America (FTA). This was due to diligent correspondence and contact between Norm Phillips and the hierarchy of FTA (Wally Schmeig). Interestingly, two additional Fur Taker chapters were also formed that year. Chapter 19A came to life in Eagle River and some trappers in SE Alaska formed Chapter 19B in the Juneau area.

In December of the same year, the first issue of what was later to become Alaska Trapper magazine was published. Glenda and Fred Chase began producing a single page, mimeographed monthly newsletter called "Trappers' Tails."

The assembled trappers were anxious to form up, but the leaders cautioned them to go slowly and thoroughly. Volunteers abounded and the work began. Our Attorney of Record was Jay Hodges, later to serve as a judge in Fairbanks. By-Laws and Articles of Incorporation were drawn up and filed in Juneau. On December 4, the IATA met again, this time in the basement of the Castle Inn on Airport Road. Some folks remember this meeting primarily for the ruckus caused by an inebriated trapper who had to be forcibly removed by Fabian. It is more properly remembered as the meeting where a Board of Directors and first slate of officers were selected.

President was Fabian Carey, Norm Phillips Sr was Vice President. Candy Monzingo was the Secretary and Ron Long was named Treasurer. Other Directors were Ken Fanning, Terry Johnson, Ken Dunshie and Chuck Vogel. Later Leroy Shank was also appointed to the Board. The official corporate "location" of IATA was 408 Haines Street, which not coincidentally was Norm and Ali Phillips' home in Fairbanks.

In December 1973, IATA announced the "sign-up" of our 100th member! The trapper was Rudy Gray of Bettles. Three new Board members were elected, including Tim Snyder, Fred Chase, and Roly Quimby. Re-elected were Ron Long and Ken Dunshie.

Fur as a commodity was coming into its own. "Trappers' Tails" reported in January 1974 that marten were averaging $24. Red fox averaged $39 and lynx $90. The top wolves were selling for about $140.

In March of 1974, IATA formalized its voluntary Registered Trapline system and formed a Trapline Boundary and Dispute Council. No one could have predicted how important this filing system of maps and notes would later become in the hassle over Alaska's public lands.

April 18, 1974 was our very first "Youth Night" in lieu of the monthly meeting. It is a tradition that continues to this day and April is still the month in which it is held.

In the fall of 1974 IATA decided that a logo was needed. The winning design, a coil-spring trap superimposed on a gold silhouette of the State of Alaska on a blue background, was submitted by Pete Buist, who won a 1-year membership in the group. In those days, a year's membership cost $10 ($7 to IATA Treasury and $3 to FTA.)

IATA held its first "Annual Meeting" at the Tanana Valley Sportsmen's Association Clubhouse off Airport Way on October 9, 1974. Another new Board member was elected. He was active-duty Air Force member Hance Clayton. Hance eventually left Alaska, but still traps and serves as President of the Northern Idaho Trappers Association. This was IATA's first meeting to be held at TVSA. This was our meeting place until we grew out of it in the late 1980's.

There were still no serious local anti-trapping issues in Interior Alaska. There were plenty of conservation issues. IATA continued to grow, expand and dabble in conservation politics. Our first big "coming out" into the public eye was the issue of the proposed Blair Lakes Bombing Range on the Tanana Flats in Game Management Unit (GMU) 20A south of Fairbanks. While IATA and trappers in general were and are very supportive of the military and their presence in Alaska, the Army and Air Force showed some fairly heavy-handed tactics in trying to establish a huge new bombing range in the middle of some of the best furbearer habitat in the State. In the process, they were running roughshod over several traplines. IATA joined a coalition of like-minded conservation and environmental groups in what ultimately resulted in a "kinder and gentler" process for the establishment of a reduced-size proposal for the Bombing Range.

The trapper at the center of attention on the Bombing Range controversy was Ron Long. In an article entitled "Trapper Working While Bombs Fall", Dean Wariner wrote in the November 19 edition of the Fairbanks Daily News-Miner: "While fighters may whistle overhead on practice bombing runs, Ron Long is determined to continue tending his trapline on the Blair Lakes Bombing Range. In fact, Long was running his trapline last week when the Air Force made its first practice runs at the target area 30 miles south of Fairbanks after bluntly refusing to acknowledge Governor William Eagen's request to hold off... Several other Fairbanksans have traplines near the 52 square mile target area also."

It was the first, but not the last, example of Alaska trappers forming political coalitions to accomplish goals that they realized they could not accomplish on their own.

Trappers being a social bunch, IATA decided to have a social function similar to old time trapper "rendezvous." In March of 1975, the first Trappers Fling was held in the basement of the Eagles Hall on First Avenue. The Chairman of this inaugural event was Leroy Shank. The event was immediately popular and it made money for the fledgling group. It is a tradition that continues to this day. That same month, we began our habit of holding IATA meetings "the first Tuesday of each month, October through April."

In September 1975, IATA President Fabian Carey passed away at the age of 58. Norm Phillips, Sr. was appointed President and Fabian's seat on the Board of Directors was filled by Pete Buist.

As spring 1976 rolled around, IATA was exploring the idea of buying land and building our own clubhouse. There was a lot of support for this plan, but a lack of funds was the limiting factor!

In 1976, Al Jones was elected to the Board for his first term. IATA began offering a Lifetime Membership category. It was also the year that IATA began to flex a little political muscle and dabble in legislative matters. Part of the original purpose of the group had always been to advocate for furbearers and scientific furbearer management. At the time, ADFG had no formal Furbearer Biologist. IATA as a group felt that it was high time for a full-time staff biologist for the Department.

With the help of Fairbanks area legislators, IATA took their campaign for a furbearer biologist to Juneau. When signed by the Governor that spring, the ADFG budget for the following year contained funding for the Furbearer Biologist position. There were more than the usual antics and personnel problems in establishing the funded position (due to some ADFG biologist "layoffs" in Region II,) but in December of 1977, Vic Van Ballenberghe was appointed as the State's first furbearer biologist.

During the legislative session, Representative Red Swanson of Nenana first introduced HB 17 on behalf of IATA. The legislation was an attempt to get DNR to recognize "Trapper Cabins" on State land. The State unfortunately resisted, but the trappers (and Red!) dug in for the long haul. The legislation passed. It was another victory for trappers and a hint of IATA's increasing political savvy.

On the federal legislative scene, actress Mary Tyler Moore was pushing HR 30, a comprehensive bill to ban the use of all leg-hold traps nationally. Alaskans will recall the "stimulating discussions and dialog" between Ms. Moore and Congressman Don Young, and the Congressman's newsworthy stunt of holding up a finger with a #1 long-spring trap firmly attached to it. It made the national news!

Starting with dabbling in political issues and the public image of the Alaska trapper, IATA was soon immersed. A scarcity of bobcats in some places in the Lower 48 seemed to be the catalyst for the animal rights community to put pressure on state and federal governments to list all spotted cats as "endangered species" under the ESA. Suddenly, the very common lynx of Alaska and Canada was a celebrity species. And not because they were in short supply, but rather because the USFWS considered them a "look alike" species! This did not bode well for trappers. A new political roadblock to furbearer conservation and the marketing of raw fur was also started on the international level. This was the Convention on International Trade in Endangered Species (CITES.) Unfortunately the United States, in a fit of environmental guilt, rushed to support the treaty.

By 1978, IATA was beginning to seem more and more like a political force to be reckoned with. We were known statewide and our reputation in Juneau and the Legislature was good. By late spring, at IATA urging, the Alaska Division of Lands finally capitulated and developed a "form" on which to apply for a Trapper Cabin Construction Permit (TCCP.)

Later that fall, ADFG distributed its first "Trapper Survey." IATA held their first "new trap" sale. This was necessary because retail stores in Fairbanks were not stocking traps and trappers needed a source of traps in order to pursue their livelihood. Politics was still on the agenda. A measure of IATA's involvement was the appearance of 11 local House and Senate candidates at the October general membership meeting.

At the fall elections, Norm Phillips wished to step down as President. He had done an excellent job guiding IATA through the turbulent previous two years. Pete Buist was elected President.

For the fall semester at Tanana Valley Community College, IATA was listed as "Instructor" for a credit-bearing class called "Trapping Alaskan Furbearers." This class continued for several years at TVCC, with Ken Fanning being the first primary instructor. Later, Pete Buist taught the class. IATA "did the math" and realized that we had the credibility and the credentials to put the class on ourselves. Most students were taking it to learn trapping, not for the credits. By the mid-1980's we were administering the class independently. Our Education Coordinator for many years was Richard Henderson and later, Jimmy Walters and Steve Potter.

In 1979 IATA decided to expand "Alaska Trapper" magazine. The Directors had decided that having a "real magazine" would be very helpful in getting our word out. The fledgling publication would become the voice of IATA and Alaskan trappers statewide. It would be a way for IATA to communicate with its members and an education tool. The magazine has essentially retained this format since that time.