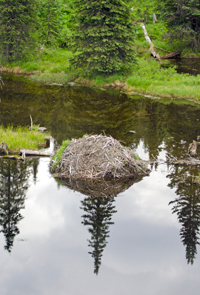 In January of 1982, Al Jones reviewed the records and membership roles and announced that we currently had members in 48 states and several other countries. Later that month, on the political front, Defenders of Wildlife sued the USFWS to stop all export of bob cats. Since these decisions were obviously being made based on politics rather than science, Alaska trappers wondered if lynx were going to be next. While lynx were not banned for export, there were new rules and regulations to endure. USFWS began requiring permits for both export and import of wild fur. USFWS also filed to remove wolf, lynx, grizzly and river otter from CITES Appendix II.

The same month, ATA tried to convince the Department of Natural Resources to actually issue "trapping cabin construction permits." While the association had been successful in getting the bill passed in the legislature and then signed by the Governor, folks at DNR did not seem to like the idea of anyone getting a permit to build a cabin on State land. They dragged their feet, promised that regulations and an application would be drawn up, but nothing happened. ATA went back to their legislative friends and asked that a bit of pressure be applied to the bureaucrats.

In February ATA joined many trapper groups across the nation, pitching in to help find Claude Dallas. Dallas was a poacher who had murdered two game wardens along the ID/NV border in January 1981, after a tussle over some untagged bobcats. An ad ran in "Alaska Trapper," offering a reward for information leading to the arrest/conviction of Dallas.

In March, inflation hit trappers... Fling tickets were up to $10!

In April it was announced that Alaskan voters would be deciding on a ballot initiative to repeal the State's "subsistence law." ATA President Al Jones announced that the association was officially neutral on the issue. While many of the ATA membership were urban residents disenfranchised by the law, a great number were Bush residents. The Association simply did not want something this divisive on our plate.

The same month, ATA was actively involved in helping to formulate the Tanana Valley Basin Plan. This plan was the first major land planning effort of the Department of Natural Resources in northern Alaska. Trappers had not been impressed with DNR's stance and inactivity on the recently-passed Trapper Cabin Construction Permit law. We wanted to be assured that trapping and trapping cabins would not be discriminated against in the planning efforts.

There were still more political issues to be dealt with that spring. In late April ATA voted to support Senator Bettye Fahrenkamp's SB 582 to establish a State Forest system in Alaska. It was eventually passed with widespread support by a variety of interest groups. ATA turned to issues on the federal docket. In June we became involved in fighting SB 2239, an effort to ban all leg-hold trap use in the U.S. This legislation was quickly beat back.

In September, national President of Fur Takers of America, Chet Hayes of Kentucky, went on a multi-species hunt in the Alaska Range. Chet took a moose, caribou and black bear. He also named Pete Buist the National Conservation Director of FTA.

The fall semester at Tanana Valley Community College saw us teaching our regular "Intro to Trapping Alaska Furbearers." But this fall the class was expanded by a week to include a section on dog-mushing and the use of dog teams for trapline transportation.

Joe Dart agreed to fill in and serve as interim Editor of "Alaska Trapper and Dog-Mushing News" for a couple of issues. Dave Woodward returned to classes at UAF with our thanks for his time spent as Editor. In November, local writer Jim Greiner took over as Editor.

Also in October, ATA began selling hats and t-shirts with the ATA logo on them. It was the start to a long and profitable exercise.

South-central trappers were also busy in October 1982. An ordinance to ban trapping (Ordinance 82-60) was introduced in the Matanuska-Susitna Borough Assembly. Trappers got wind of this and mobilized. Over 100 trappers showed up at the Mat-Su Assembly meeting and made their views known. The ordinance passed, but only after the trap-ban language was taken out. Substitute language was inserted that recognized the history of trapping in South-central Alaska and praised trappers for their conservation efforts. What a turnaround and what a political victory of a huge nature!

Another positive spin-off of this controversy in the Mat-Su was that in December, an organizational meeting of the Mat-Su Chapter of ATA was held.

Soon after the New Year rang in, ATA announced its first ATA belt buckle design contest. The winner, to be chosen by the Board, would win a Life Membership.

At the February ATA meeting in Fairbanks, we had our first discussions of the dog lice being found on wolves on the Kenai. Right-thinking ADFG biologists wanted to capture and put down the infested wolves, but unfortunately the USFWS intervened. Most of the infested wolves were on the Kenai National Wildlife Refuge and the USFWS wanted to "let nature take its course..." The politically correct direction was chosen and as we all know most wolves on the Kenai Peninsula are infested with dog lice and are essentially unmerchantable.

The March edition of the association magazine, now known once again as "Alaska Trapper" featured our first-ever GLOSSY cover and the same month, we began our computerized mailing label system.

In mid-March, we had TWO Trappers Flings. One was held at the traditional location (Eagle's Hall, downtown) while the second was held (simultaneously) at the National Guard Armory near Alaskaland. There were several incidents at the second location that once again proved that trappers should not party without significant "adult supervision." President Al Jones publicly thanked the Fairbanks Fire Department EMTs for their "prompt resuscitation" of two of the rowdies. ATA also ended up with quite a bill at the Armory to replace a window that was shattered when someone mistook it for a door and tossed their buddy through it...!

That same month, Jeff Austin of Eagle was named as the winner of the ATA belt buckle design contest.

In October, ATA entered into a working arrangement with the Department of Transportation to help trap out problem beaver along Chena Hot Springs Road. Randy Zarnke wrote a great feature article for "Alaska Trapper." The story was about Danny Grangaard of Tok. Both Randy and Danny were to become "regulars" at ATA.

In November, Manning #9s were being sold in Fairbanks for $55.

December was marked by the formation of a new ATA chapter being formed in the Glennallen area. By this time we already had chapters active on the Kenai, in the Mat-Su and in Delta Junction. The membership rolls continued to grow, with our membership including just over 800 trappers for the first time in the history of the organization.

In January, Larry Voorhees took over the reins as President of ATA.

After some heartache and discontent (much of which was unclear to the Board) the Mat-Su Chapter decided to un-affiliate themselves from ATA. The Mat-Su group then became their own entity, officially called the Last Frontier Trappers Association. Kenai Peninsula trappers reported 5 more wolves infested with lice had been trapped on the Refuge.

As always, March was a busy month. The 10th Annual Trappers Fling was held. Our guest of honor was Parker Dozhier of Arkansas. At the time, Parker was an NTA Director-at-Large, Associate Editor of "The Trapper" magazine, and Chairman of the Fur Resources Institute.

ATA held a very successful fur sale at the Gavora Mall. Our trappers gathered up a lot of fur and fur products to sell and the mall owners spent about $1000 advertising the sale.

Also in March, the Alaska Fish and Wildlife Safeguard program was established. The program offered rewards to people who provided information leading to the conviction of wildlife violators. ATA donated $250 to the initial effort. A statewide board was appointed by Governor Cowper, and ATA's Pete Buist was named to that board.

In Juneau in March, Fairbanks legislator Senator Bettye Fahrenkamp introduced SB 301 at the request of ATA. The bill would establish a furbearer management program within ADFG and increase the price of a trapping license to fund it.

In April we hosted a visit from Dr. Major Boddicker of Colorado. Boddicker was at the time a key figure in the Colorado Trappers Association, and also associated with Colorado State University. The same month, ATA voted to again affiliate with the Alaska Outdoor Council.

In May 1984, ATA announced its popular "time payment plan" for getting a Life Membership in the association. We also held a "Swap and Sell" at the National Guard Armory where apparently the management had forgotten all the trouble we had caused at our Fling there the year before! ATA also held a membership recruiting contest. George's Saw Shop donated a Husqvarna chain saw to be used as the prize.

The Legislature passed our SB 301 and in June Governor Sheffield signed the bill. The price of a trapping license would be increased, but in turn we would have a real furbearer management program at ADFG. The Department promised to keep the Furbearer Biologist position in Fairbanks. This was a natural choice, since the bulk of the trappers and trapping activity were in the Interior.

In December we held another fur sale at the Gavora Mall, selling nearly $3,000 worth of fur to the general public. Also that month, ATA announced a fund-raising raffle of a 1985 Skidoo Tundra (retailing for $2350!) The drawing was scheduled to be held in March of 1985.

By early 1985, ATA was up to 24 Lifetime Members. Pete Buist won the membership contest, signing up 11 new members and collecting the Husky saw. In March, we held another fur sale at the Gavora Mall, another successful Trappers Fling, and participated in the festivities surrounding the Open North American Championship Sled Dog Race. Also that month, the first anti-hunter/trapper harassment law was introduced in the Alaska Legislature. It passed easily, but was vetoed by the Governor.

In May, ATA helped to draft HB 407 to clarify what "parts" of game and fish could be legally used as bait.

In June, Defenders of Wildlife designated the lynx as one of its ten "campaign species."

In October we began a reorganization project, modifying the by-laws and Board structure, increasing the number of directors from 9 to 11.

In December, the Kenai National Wildlife Refuge was showing the anti-trapping bias of some members of its staff. The Refuge began clamping down on trapping "methods and means." According to all the "memos of understanding" between the State and Federal governments, this was actually the prerogative of the Alaska Board of Game. The other push by the feds was to try and close a large chunk of the Refuge to trapping. Trappers will recognize the name of the FWS staffers driving this effort. One was Ed Bangs, who went on to fame as the fellow who coordinated the Wolf Reintroduction Project in the Lower 48. The other was biologist Edgar Bailey, now retired and a resident of Homer. Bailey still routinely submits anti-trapping proposals to the BOG.

We finished the year with 34 Lifetime Members. On the business end of things, we had been meeting at Ryan Jr. High. A committee was formed to find a new meeting place. The first choice was the Mushers' Hall on Farmers Loop. The building had been built with a Capital Improvement grant from the Legislature and was to be managed by the Alaska Dog Mushers Association for the use of the community.