From the ATA Archives: Fish and Game News, February 2007
by Craig Gardner 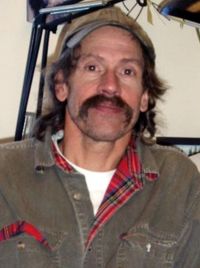 By the time you read this the wolf season will be at its tail end but the good news is wolf trapping can be really good in March. However, keep in mind when you are making those bait and trail sets that moose start moving off their winter ranges during the last half of the month and may become more vulnerable to snares because their increased movements increase the chance of them bumping into more. I mentioned in my last article that we spent time at the Kenai Moose Research Center and on the 20A Flats trying to figure out how moose are vulnerable to wolf snares. Hopefully this information will help you make better sets, reducing the chance of an unwanted catch of a moose.

During February 2005 and January 2007, we evaluated moose vulnerability to standard snares by setting wolf snares with 60" and 72" loop sizes. We watched moose come in contact with 282 snares and recorded how the moose encountered the snare, the fate of the encounter, and a description of the habitat of where the snare was located. We were able to collect data estimating catch rates by loop size, the ratio of nose to leg catches and describe how each type of capture happens, and how habitat type affects vulnerability of moose to snares.

Moose initially contacted a wolf snare with their chest or shoulders (67%) or by the nose (33%). Moose hit 72" snares with their nose at a higher rate compared to 60" snares. The initial capture rate of moose when they contacted a snare was 14.2%. The other snares were either pushed aside (20.4%) or knocked down (65.3%) to form smaller loops at snow level. Of the snares knocked down, 86% formed loops >6" in diameter and remained in the trail. This is an important point because no leg catches occurred when the moose first encountered the snare; all leg catches occurred after the snare was knocked down and the moose stepped in with either its front or hind foot. To further test the catch rate for these now formed foot snares, we left 15 of these loops operating over 1 night and had a catch rate of 27%.

These data indicate that moose are only vulnerable to leg catches if they knock the snare down. The first time is when they initially encounter the snare, knock it down and have to get all 4 feet past the smaller loop. Usually, the front legs are moving past the snare as it is drops, resulting in few moose initially caught by the front foot. However as the snare lays along the ground, the following moose, many times its calf, now has to step all 4 feet past the snare.

During winter 2005-2006, I set test snares in various habitat types in the Tanana Flats south of Fairbanks to evaluate catch rates of wild moose. I placed snares in common patterns including trail, bait, and kill sets. I placed 3-22 snares at each set and let them soak between 5 and 21 days before checking. Using tracks in the snow and the trip pattern of the snare I was able to tell what happened if a moose encountered a snare, either caught or knocked the snare aside or down. I also recorded if the snare had dropped due to wind or snow loading. For those situations I could not tell what happened to the snare, I dropped these data from the sample.

Catch rates for wild moose using standard wolf snares was 34.7% and were significantly greater compared to catch rates for moose in the pens (14.2%). The catch rate was slightly higher for 72" snares (34.7%) compared to 60" (30.7%). I think that the higher catch rate for wild moose can be attributed to snares that were knocked down but remained working as smaller snares lying along the snow line. As we found watching the fate of snares at the pens, 86% of the knocked-down snares remained working and any moose encountering these snares were very vulnerable to being caught.

So how are moose caught by the nose? I mentioned that 33% of the moose first contacted a wolf snare with its nose. Generally, when a moose is just traveling its nose is about the height of the top of a wolf snare. If for any reason, the moose lowers its head, even 1-2", it becomes very vulnerable to a nose catch. Also, the habitat moose are walking through has an effect on nose catches. When moose are browsing in shorter willow thickets, they carry their head lower and are more vulnerable to nose catches. In willow thickets that are older and taller, moose have to stretch more to reach suitable browse and therefore carry their head higher and nose catches are rare. In thick-ass willow thickets moose are moving their head not just to browse but to duck obstructions and nose catches become more common. An eye opener for me was how moose carry their head when walking through spruce thickets with little browse. In one word, it was low resulting in more vulnerability to nose catches if they encounter our trail sets for wolves cutting bends in a river.

Unfortunately, I am both exceeding my word limit and also my time limit to get this to press so I will have to discuss possible solutions to keep moose out of snares next issue. But in parting, I know that most of you already have all your wolf snares made up and probably out in the woods by now but if you haven't please take the time to make them breakaways. Breakaways will not eliminate accidental catch but allow most of the foot caught moose a chance to escape. Good luck trapping.

A couple of pictures to give you an idea how moose are vulnerable to wolf snares. 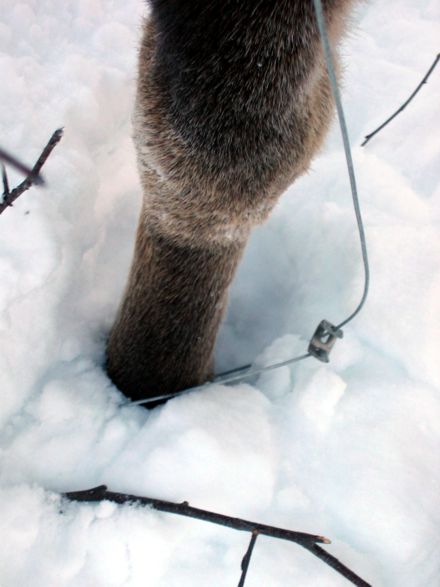 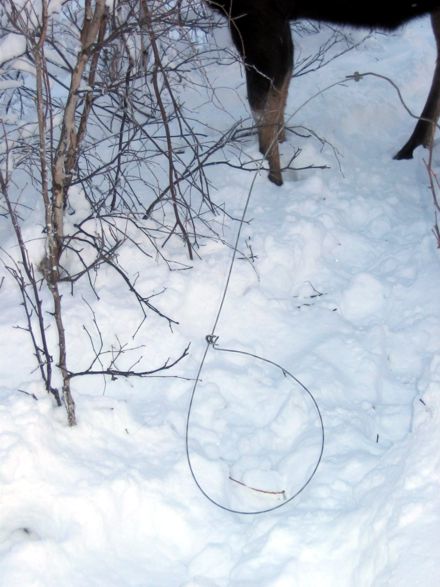 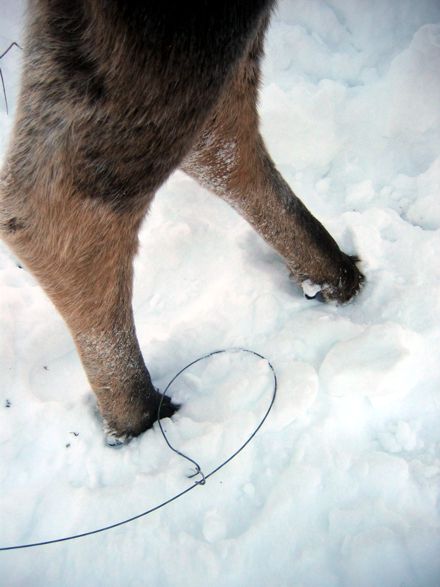