From the ATA Archives: Kantishna Country Trappin'
by Robert Dick

Editor's note: For most of one season, we ran excerpts from Al Starr's trapping diary in Alaska Trapper magazine. Robert Dick sent this in as another Al Starr tale.

I was trapping at Bear Paw in the Kantishna country. I happened to canoe down Bear Paw River to check out [musk] rats and saw a tent on a high bank. An Indian came out of the tent so I stopped by and had a talk. He was surprised to see me - thought I was an old deaf man.

I looked up at the sky and it was going to rain any time so I told him to come to my cabin. He was pretty shy but I kept on telling him it was going to rain (he had been sleeping on bare ground). We finally went up to the cabin. I made a bed for him and cooked a good meal.

After that, I asked him questions about Bear Paw Roadhouse which had fallen down. He said, "When I was young, a man had fast dog teams. He hauled miners on the trail from Nenena to Diamond in two days and one night. Many miners went to Diamond for gold." Now only Joe McHenry's cabin is still there. With no more gold rush, now everything - trails and bridges - are gone. 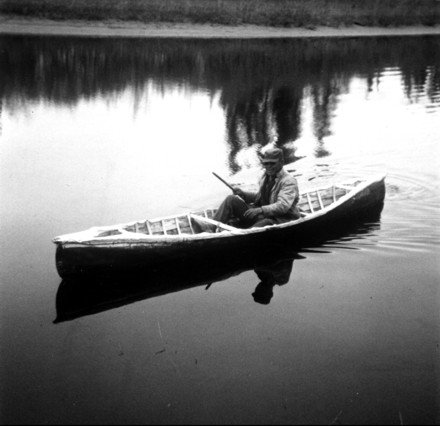 Every year Al Starr came here in springtime in his canoe. He built this canvas cover with cloth and paint - very tipsy. "Not for me," I told him. "All deaf people have no balance."

A few days staying with me then he left, canoeing down Kantishna River to the Tanana River.