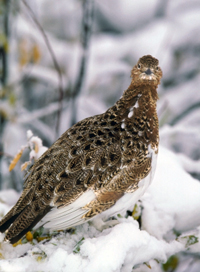 From the ATA Archives: Thoughts on Trapping in Iowa and Alaska
by Potter

Growing up in southwest Iowa, the crisp fall days, the falling oak leaves and the migration of ducks and geese on the Missouri flyway pulled my thoughts away from everything but trapping. I believe some people trap because they had a friend take them on their trap line, others having read stories in books or magazines decided they would try it. Lastly some people have a deep desire to trap since they were young. I was that kid. I didn't really know any trappers, and my dad didn't trap, but as soon as I was old enough to get around in the woods I couldn't wait to start trapping. My dad bought me my first dozen traps and took me trapping every morning before school. The first year I caught one muskrat and one raccoon. Was I disappointed or frustrated? No. I couldn't wait until the next year. Every year I learned more about the habits of the furbearers I wanted to target, and the more I trapped the more I caught. By the time I was 17 a lot of my income was from trapping. When I was in the fifth grade I wrote to the Juneau chamber of commerce for information on living in Alaska. The information they sent me planted a seed in my mind that when I finally got old enough I was going to move to Alaska and trap.

Most of my friends are trappers and a lot of them I met in the association. We are on the same page when we talk. When I was a youngster I snuck in on a guy who wasn't trapping his line because he was going to college. Was it the right thing to do? Absolutely not but I was young and stupid. It was prime furbearer habitat and I caught my first mink there. When I pulled it up to my amazement it had a rooster pheasant tail sticking out of its mouth. I thought about it for a long time but never really could figure out how that happened. Through trapping I became good friends with the guy who I had trapped that mink on. 35 years later here in Alaska we were hunting moose and over one night's campfire I finally confessed to him that I snuck on his trap line and had caught the mink with the feather in its mouth. He then told me he knew because he had come home on Christmas vacation that year and was hunting pheasants saw the mink in the trap, read my name on the trap tag and stuck that feather down it's mouth to let me know that he knew I was trapping on him. You got to love trappers and their sense of humor.

One of my best times in life was trapping beaver with my dad and son. We did it on snowshoes in the spring using a spud and we caught 30 beaver that year. My son was pretty young then and he was proud to show me that he had skinned a beaver without putting any holes in it. He held it up and I swear it had 30 pounds of meat on it. Dad's been gone for two years now; he enjoyed trapping beaver and coming to the association's meetings. I give him more then anybody else the credit for making me a trapper by taking me out those mornings before school. I think a lot of those spring days trapping beavers with him and the laughs we had, and I miss him.

Springtime on the line makes you feel young again with the sun on your face and blue skies replacing the gunmetal color of them in mid winter. Wolf sets are out and you feel like a kid at Christmastime watching wolf tracks heading up your sno-go trail to your next set. In November and December it's coming around a corner to see a marten hanging from a pole fur incredibly puffed up wearing a mantle of fresh snow. It's the smell of raw fur and the pride of looking at the year's catch the day before you sell it. People think trapping is a hobby but it goes so much deeper than that. I have tried to convey to people why I trap but I really don't know myself. When fall trees give change to bare branches and the first snow flies something inside me tells me it's time.