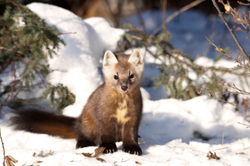 Selecting locations for marten sets is one of the most important aspects of marten trapping. If you are creating a trapline in a new area, this could seem like an impossible task to narrow down the possibilities. There are several ways that I have of choosing set locations. I do not claim to be an expert marten trapper. Experts at any activity are rare and the word is highly overused and abused. I do catch between 50 and 200 marten a year depending on marten populations, traveling conditions, and fur prices. I do not trap in a high density marten area. I figure to catch approximately one marten per mile of line. Depending on marten density I catch sometimes more or less than a marten per mile.

My trapping area consists mostly of lowland swamps divided by sections of timber and brush consisting of birch, cottonwood, spruce, willow and alder, with some devils club thrown in for fun. I also trap some areas of large forest and foothills. There are several factors that should be considered when choosing locations. The prevailing wind direction, food sources, terrain features, and marten tracks are a few. I will describe some of my marten sets and the reason why they are at these locations which should help the reader understand better how to pick locations. I like to spread my sets about a mile apart, unless I am in heavy timber. However, this varies based mainly on terrain and vegetation.

I have my marten sets named and documented in my trapping log to keep track of catches. These names will start with an M and end with a number; for example, "MC12". I think a description of some of my marten sets and the reason for their location may be instructive.

M2 is located on the edge of a big swamp where the trees meet the swamp. Marten like to run the edges of grassy swamps to hunt for voles. M2 is located in the corner of an L that the forest makes around the swamp. Marten running in the forest tend to get squeezed into the corner of the L. The prevailing wind is from the northwest and blows my call lure into the forest where marten are more likely to travel as opposed to the wide open swamp. I have captured 15 marten here in nine years.

M-EN5 is located at the bottom of a hill leading up to a mountain. A big swamp ends here and the climb up to the mountain begins. The forest is quite narrow here before the hill begins, thus making a bottle neck for marten passing through the forest along the swamp. The hill itself also tends to force marten through the area if they prefer not to move up in elevation. Marten hunt the swamp edge for voles and there are also hares in the area. Any marten that come down from the mountain to hunt the swamp may also pass this set. In eight years, I have trapped 28 marten here.

M3 is located in a small grassy clearing in a narrow strip of timber located between a big swamp and a large river. Marten generally will not travel in wide open areas like swamps and large rivers. When forests become narrow between two open areas marten travel routes are narrowed and sets located in these areas have a higher probability of marten finding them. The grassy clearing also provides set visibility when using a visual attractor like a feather or shiny object. The grassy area has voles and occasionally hares inhabit the nearby brush. Since 1995, I have harvested 20 marten here.

M10's primary attraction is an abundant hare population in the area. M10 is located on the edge of a big swamp and timber. It is located such that the prevailing NW winds blow call lure into the forest and brush where the hares are located. The marten in this area will tend to bypass the marten set several times before they finally climb and are caught. With the abundant food source the marten tend not to be hungry. A large percentage of the marten from this set tend to be large males. I believe this is because large males dominate the best food areas which tend to be areas with lots of hares. I have removed 18 marten from this set in a decade.

MH-1 has been an on and off set for several years. I either do really well (three or four) or none each year here. MH-1 is located in a super hot trapping location. I have harvested fox, coyote, wolf, lynx, otter, and wolverine (and a whitefish in a 330 body grip) from this area. A major sockeye spawning stream flows into a large river here. The stream divides two large swamps and has a narrow strip of timber on each side. The timber along the large river is also rather narrow here. The sockeye tend to last well into winter with otters and bald eagles pulling them out of the creek. I believe these fish are washing out of their spawning areas way further up stream. As far as marten go, the appeal here is the bottle neck provided by the narrow timber and left over scavenging of sockeyes. Since sockeye escapements are very sporadic to our area, maybe the good years correspond to good sockeye escapements into this system.

MC2 was a one year wonder. It was located next to a small stream that flowed through a swamp. I placed it here because of a theory that the swamp narrowed here and marten wanting to cross the swamp would choose this area as it exposed them to less of an opening to cross. This theory has never proven out on the trapline. The first year I set up MC2, every check had a marten chewed marten in it. I could not check it fast enough. The next year I put in two sets to prevent other marten from chewing the captured marten. No marten were chewed because I caught no marten here the next two years before I abandoned this location. What had made this location so wonderful the first year was not the terrain but the active beaver lodge within twenty feet of the set. Marten, like most predators, like to check out beaver lodges.

The last two examples illustrate that changes in food availability at a location can affect the productivity of a set. Snow depth and temperature can also influence marten habits. Snow depths can cause hares to move or voles to be inaccessible. Deep snow in the mountains can move ptarmigan into lowland areas thus attracting marten and/or causing marten to move to lower elevations in search of food. Cold temperatures can cause marten to move up in elevation where temperatures are warmer.

Over the years using some of the above criteria of food, wind, and terrain/vegetation, I have had some locations that proved to be duds. For whatever reason, some nice looking areas and sets never produce. Reviewing my trapping log, I note sets that don't produce and usually move them around a little until they start producing. If, after several years of adjustment and I still catch no marten, I don't set the area. The best way to determine if a set is good is by recording its performance.

Setting on marten tracks is also a good technique to start with especially in a large forest. Generally setting on tracks is at least good for that year and may turn into a producer every year. If these tracks correspond with some of the above criteria, you should have a winner year in and year out. Some of my more productive areas in the larger forest are on the edge of swampy brushier areas within the forest. Sets in a large forest are generally more of a trial and error method for me.

In foothills with more open vegetation I like to set ridges and try to factor in the wind direction and visibility. With the more open spaces, marten can see much further and a shiny coffee tin lid attached near the set catching the sunshine or moonshine (Note: not booze - that's for the trapper to humanely treat his trapline suffering) can attract a marten's attention from a long distance. Call lure carried on the more frequent wind through the more open areas is also very effective. The food source that may factor in to set locations in these areas for me generally is ptarmigan.

I hope some of this information is of some use to fellow trappers. Remember I'm not an expert; I just have some field experience I would like to pass along. Three basic ideas are used by me to target marten. Find spots that narrow down a marten's potential travel route. Find areas of abundant marten food. Make it easy for the marten to locate the set by appealing to the marten's senses of smell and sight. The most important thing I hope you learned and/or got from reading this is how important it is for members of the ATA to write something for the Alaska Trapper so I also have something interesting to read here in the bush, in my little, dead porcupine smelling cabin during trapping season.