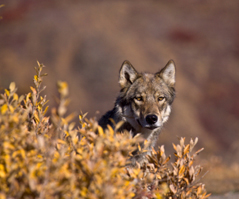 I'd trapped awhile but never for wolves. After reading M. Mierotto's article on CDR 7.5 in the ATA magazine, I thought I'd buy six and see if I could make them work. I boiled them, waxed them, and stuffed them in a bag with spruce boughs. I set them with fresh gloves rubbed on boughs.

Around here we get wet snow, then wind and freeze down, then rain followed by more freeze down, and on and on. The winter of '04-'05 was bad this way. Keeping the traps working was almost a joke at times but I kept at it. I constructed a pee post, a blind trail set, two baited and lured flat snow sets, a lured flat set and a wolf track set.

Seems like half the time the sets wouldn't be working, looking obvious or stale and disdained by any canine in the area. Then with the luck of a light fresh snow and a pack of wolves finally moving into the area, one of the lured and baited flat sets connected. The trap had been exposed a few times by wind and rain so I had moved it off to the side of the set with a gland lure backing hole in the snow. The trap held the paw nicely across the toes. The lamination and gap left no damage. I set back and pondered my first wolf - a beautiful silky black female with blue grey hips and shoulders.

Another of the CDR's was chained to a downed tree along the frozen river bank. It was set in the track of a wolf that had headed up river. The male wolf heading downstream stepped directly on the pan and was caught firmly across the paw. This second wolf came along a week to ten days later than the first and was similarly marked and colored - only larger and had coarser fur.

This year I added two dozen wolf snares and worked with them as well. Interestingly, I had a wolf get into a 3/32nd 1x19 cable and break free. Swivels are essential and always try to tie off high is what I've found. Between the loss of this wolf and the one that stepped on a 1/4 inch edge of one of my traps instead of the center, I was feeling somewhat chagrined.

So I didn't catch any wolves this season but I did get 10 coyotes as consolation prizes. Even setting snares high, these little brush wolves bounce along and get caught. We also have a lot of them around here now.

I'd recommend the CDR 7.5 trap. I especially like the Paws-I-Trip pan and overall it seems a heavy duty set up. Even though my beginners luck didn't carry over to this season, I know it wasn't the traps' fault, nor was it the wolves.