From the ATA Archives: Thoughts on the Tundra II'
by Marty Meierotto

There are many snow machines of different makes and models these days that trappers use. The demands a trapper puts on his sno-go are great and any weak points on them will manifest themselves sooner because of the many hours of use the trapper gives them. I know most of the boys are using the bigger twins these days but because of my remote location and the difficulty of flying out a big machine I run the ski-doo Tundra. It isn't the perfect trapping machine but it does good service for me. Over the years and going through several machines I have discovered a few common weak points on the Tundra that need attention. Maybe I can save a fellow Tundra user some expense or a long miserable walk by this article; if so then my effort here will not be in vain.

First off I want to explain how I ended up with the Tundra. When I say Tundra I refer to the Tundra II with the bigger engine, 93 and newer. The original Tundra with the 253 engine had a fan belt that broke and a crank that bent. There is a reason why they don't make them any more. I am not brand loyal as some folks tend to be. I picked the Tundra because it is small enough to haul out to the trapline and still get the job done. Getting it to the trapline entails stripping it down to the last rivet and piling the numerous parts, pieces, and coffee cans of nuts and bolts into a cub and then reassembling it all over again on the trapline, one of the joys of bush trapping I guess. I don't have lakes and rivers and big open areas to run through so speed isn't a factor. It is not as crippling to the body as the old Elans were. It is still light enough to dig out of most holes without a come-along and pry pole. It has more power and pulls a sled better than most other machines of comparable weight and size that I am aware of. It breaks trail well and doesn't seem to load up with snow and ice in the engine compartment causing the steering to freeze or create carburetor ice. There are times when I wish I had a bigger, more powerful machine, but most of the time it does fine. Keep in mind that these are my opinions for my particular area, and I am in no means condemning other machines for trapping; I just don't have enough experience with others to judge.

Once I fixed the weak points I am going to mention that the Tundra seems to be a dependable trapping machine. For starters, get rid of the oil injection system. It is great for convenience sake when on a short ride or in the company of friends that can lend a hand if it fails, but it has no place on a remote wilderness line where no help can be found or expected. I have had several fail on me and have heard of many more that did. The bottom line is that if it fails, you will burn up your engine, dead, over, end of story, begin walking from here. There may be super dependable oil injection systems out there, but the Tundra's isn't one of them. Don't bet your life on a small piece of plastic or a cable that can fray. Murphy's Law applies here: If something can break, it eventually will. Mix your gas and eliminate one of the many things that can go wrong. By the way, if anyone is interested in Tundra oil pumps I have a collection of them free of charge; some are brand new!

The first Tundra II's had long skis on them. The newer ones have a shorter ski. I think they changed around 2000 or so. The longer skis work fine but they require a bit more elbow grease and after hours on a tight twisty trail they make a difference. Again, there is a reason they don't make the longer skis any more.

This next fix requires a welder and pulling the engine (which is fairly easy) but if you are headed into the out and beyond with just yourself and a pile of traps for company it would be a good idea to go through the hassle of doing this. I got several hard years of use out of my first Tundra II before this problem surfaced and literally hundreds of running hours, so take this with a grain of salt, but it has happened twice to me now, so I always strengthen these weak points before I take one out to the trapline.

The entire tub is connected to the front ski assembly by some light welds and thin metal. With the nature of the suspension system this is a weak point. Hitting snow-covered stumps and tussocks or even smacking into a cut bank that brings the machine to a stop, even at relatively slow speeds, puts tremendous pressure on these welds. The ski and shock tower work like a big cheater bar putting a torque on these welds that cause them to break. You can imagine the leverage that the ski has with the weight of the whole machine behind it as it twists. A system is only as strong as its weakest link, and the heavy, well-built shock tower assembly eventually breaks away from the thinner metal of the tub. I beef up this area with added metal braces and a few more welds. 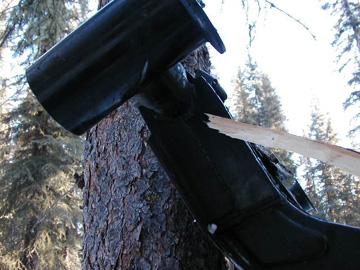 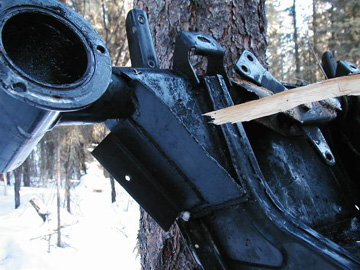 While the engine is out, strengthen the steering assembly that is welded to the center of the pipe connecting the two shock towers. I have had this piece break away from this big tube, caused no doubt by the endless hours of hard twisting of the handlebars on the trails. Because of its position under the engine, it is impossible to get at, and if it breaks on the trail all steering is gone and it is a no-fix, meaning once again that the walk starts here. I have only had this happen once, so this fix may be overkill, but as long as I have the machine stripped for the flight out to the line, I do it just to be safe. If you don't want to beef the steering area up just give the assembly a look and a jiggle during your pre-flight. It won't break all at once and you will notice cracks or broken welds long before the machine becomes unsteerable. 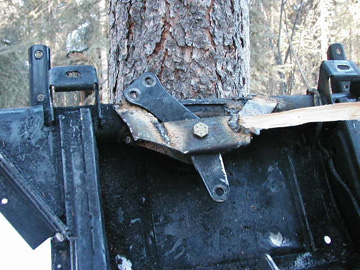 I know a lot of trappers have had trouble breaking the steering arm that connects the tie-rod to the shock tower assembly. Knowing this beforehand I bought several replacements to have on hand on the line, but strangely enough I have never broken one. I don't know whether Bombardier started making stronger ones or there was a run of flawed parts that made it to Alaskan machines. These pieces break when a tree or tussock is hit with the ski, especially a side load in a turn. I have done that very thing countless times and have always expected to break one but I have been lucky I guess. Good advice would be to carry one with you. That way you will never break one; as we all know, you only break the things that you don't have on hand. Mr. Murphy's inescapable law once again. 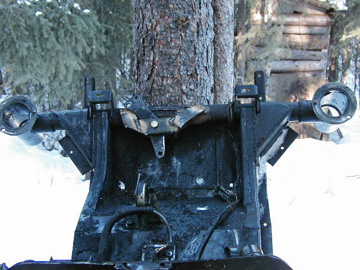 Next on our list is the track. The Tundra track has evolved into a dependable one, but the older machines have the makings of that long walk to a cold cabin or truck built into them. The first ones on the original Tundras were useless, so don't go near them. Next came the tracks that had a slide guide on every clip. These weren't too bad. The newest version has all the right clips and also a rubber knob behind the clip assuring that the clip won't bend even if the track jumps. This is the track to have. I am not positive on the year that they came out, but I think it was 2000 or so. Tracks jump off sometimes; it's like your wife getting mad at you: It will happen from time to time on a rough trail. Check your tension and alignment regularly, and if clips are bent or missing, replace them. Nothing is more aggravating than a track that won't stay under your machine correctly, and it can lead to other damage to the suspension system as well.

There are other slight modifications that can be done to the Tundra as well as other machines that make trapping from a sno-go a bit more user friendly. Most long-tracks have a rack behind the seat and a box built to fit into it is nice. Just don't make it so high that it gets in the way when you are throwing your leg over the machine.

On the Tundra I always add a high windshield. It sometimes seems to be in the way, but for me its wind blocking on a cold day outweighs this inconvenience. To go along with this, I put a piece of plastic material on the hood under the windshield about 6 inches high. This creates a type of dash area that I have my pistol on and a spare pair of mitts. This dash area has the added advantage of being heated by the fan vents in the hood. This makes for a warm pistol grip, and I always have my spare mitts heated.

Another modification for the Tundra is extending the handlebar height. This makes standing up on the machine as you drive much more tolerable as you're not stuck between bending over and standing up. You can do this by buying after-market extensions or simply cutting the steering column and adding a piece of steel bar to lengthen it.

Always remember, regardless of the type of sno-go you run, if something on your machine moves, whether it is supposed to or not, means wear. Wear is the inevitable precursor to worn out. If it is supposed to move, it will require one or more of three things at some point in its life, tightening (adjustment), lubrication, and replacement. If it is not supposed to move and it does, it is either already broken or in need of immediate tightening or repair (replacement). This simple dictum should be every trapper's mantra as he looks over his machine before every run of the line. If you're not looking over your machine before every run and you don't break down regularly, then you lead a charmed life and I wouldn't change a thing; the rest of us envy you.

One more inevitability is worth mentioning; the faster you drive your machine the sooner things break...