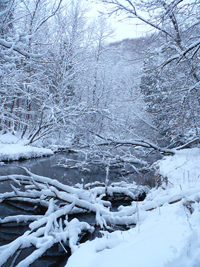 From the ATA Archives: The Great Christmas Tree Caper
by Ace Callaway

I was thinking back the other day on some of the experiences of my youth. I wasn't a REALLY bad kid but I guess you could say I had a touch of ornery in me. My friends were of like character and I guess we are all lucky to have survived with some of the adventures we had. When I was in college at CSU in Colorado most of the "crew" all lived in one house to save on rent. There was Mike who was and still is my best friend to this very day. He was every bit as much of an outdoorsman as you could find in those days and we hit it off from day one. He was 295 pounds of Polish Pennsylvania trapper and most of the guys called him "Geebah".

Then there was "Munch". Munch and I had gone to high school together and his folks owned the local western wear store. Munch was so called because he would eat ANYTHING. Usually on a bet…but the things that guy would swallow just to win a beer would make a buzzard sick. Because of his love of eating he was rather large as well…around 270 pounds. Doug was one of the best taxidermists in the nation and a past president of the National Taxidermy Association. At six foot two inches tall and 130 pounds soakin' wet Doug could, however, drink beer with the best of them so we let his lack of size slide. He was the best duck and goose caller you ever heard so he fit right in with our bunch.

We all worked as bouncers in one of the local college bars and it happened one night a couple days before Christmas that when we got home at around 2 a.m. - Mike screamed out, "Damn, I forgot to get a Christmas tree and Dad is going to be here later this morning. I promised him I would have everything ready." Now Geebah's Dad was kind of like an old Wolverine. Small, EXTREMELY hairy and very easy to get mad. He was so hairy that after he had heart surgery and was staying with us after being released from the hospital, he came out of his room without a shirt on. They had shaved him for surgery and I swear he looked like he was a giant rabid poodle. We didn't dare laugh if we wanted to remain with the living though. Back to the story.

Geebah said we had to get a tree. Although I was slightly under the influence of "Spirits" I did have some sense of time. "Where are we going to get a tree at 2 a.m.in the morning?" I asked. Munch said, "Let's go up North on the Wyoming line and steal one." Well, I guess we had all had just enough booze that night to make it seem like the perfect solution. Did I mention we were in the middle of the first big blizzard of the season? "We can take Ace's CJ-5 Jeep…it has a winch in case we run off the road," Doug said. "And besides, I need a couple big jack rabbits for a mount I'm doing and there's a lot of them up there."

Well the stage was set for a real adventure. Off we went through the snowdrifts for close to sixty miles. Three 250 pound plus men and one scarecrow in a little CJ-5. We looked everywhere but we could not find "the right tree." "If we don't get a tree, Dad will have our butts for breakfast. We have to find the PERFECT tree." All at once Geebah yelled, "THERE IT IS"! "Where?" I asked. "Right over there about fifty yards." Well, I must admit it was a pretty tree. It also happened to be on one of the meanest rancher's properties in all the country.

I told the guys, "We have to be really quick about this if you're sure that's the one you want." Munch was out of the Jeep and running toward the tree with a little hatchet in his hand before we could even reconsider.

Did I mention the Blizzard? Well, as Munch ran across the snow drift in the ditch he had forgotten about the barbed wire fence that was just under the surface and the crusty snow just happened to give way as he straddled the top wire. You know, I never knew how tangled up you could get a zipper on barbed wire. As Doug and I helped get Munch off the wire, we did mange to shake the fence a couple times just to hear him cuss at us, Geebah proceeded to cut down his "perfect tree."

Then something we did not expect to happen did. "Come help me carry this thing," Geebah said. Now I've seen him go through an offensive line carrying two lineman on his back and he needed help carrying a Christmas tree? Well ... I guess you could say it was a little bigger than we had originally thought. When all four of us finally got it back to the road we could see that this was going to take a little effort to tie onto the Jeep.

So we put the base up front and tied it down to the winch and had it going over the roof resting on the roll bar. We tied it down from about the midway point to the hitch on the back and still had about 8 feet sticking out the back. That's when we noticed you could not see the jeep any longer. Geebah said we could tie the branches from the hood to the side so we could see out the front - kind of like looking out a tunnel. That actually worked out OK and we didn't even have to use the windshield wipers to keep the snow off the windshield. I could see anything that was in front of us although what exactly was East and West was anyone's guess.

We all had to climb through the branches in the back to get inside since the doors were all blocked by limbs. Off we went. Well it took a while but we finally arrived at the house around 6 a.m. Doug had gone to sleep in the back with his .22 rifle hanging out behind the rear wheel of the jeep. The barrel was about 10" in diameter from all the slush that had built up on it. We all stumbled into the house, exhausted and decide to unload our prize after some sleep.

Nine a.m. ... "WHAT IN THE HELL IS THIS?" came a booming voice. We all knew that voice and hurried to the front room. Looking out the window in the light of the new day we all realized that we may have over did it. You could not see the jeep at all. Here was a giant tree with four tires sitting in the drive. It was so big that we couldn't even cut off the top and get it in the door. All Geebah could say to his Dad was, "You're never satisfied are you? No matter how I try it's just not good enough. I suppose it's not big enough for you." He couldn't say it with a straight face though and I guess his Dad couldn't help either because we all saw a little smile starting to show through on his face as well. "Well, we can always use it for fire wood," Doug said.

We all decided we had better get some breakfast down at the local café and then try to find a real tree so we all jumped in Doug's truck and took off. It was all we could do to keep a straight face at the café though. Two State Troopers a couple of booths away were laughing about the drunk they pulled over earlier that morning that had told them that "Nature was rebelling and a tree had come at him and tried to run him off the road..."