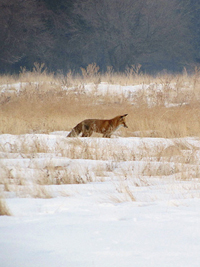 From the ATA Archives: Fox Trapping Is Easy... Sometimes!
by Carol Lingner

After all, hadn't I caught a fox in the first snare I ever set... and on the morning after opening day of trapping season? "This is going to be easy," I said to myself as I walked back from my morning trip to the outhouse carrying my red fox proudly into the house to show my husband.

Maybe I should back up a bit. The year before, my husband and I had taken early retirement at 55 from State jobs and escaped from Juneau to our cabin, previously known as hunting camp, at Mankomen Lake. We spent the first year expanding our knowledge of our new surroundings. This included extended stays at the breakfast table over extra cups of coffee watching the effects of sunrise and the ever changing light on the snowy mountains around the lake. But it also meant long walks along the various roads made years ago by the original homesteader on the lake in his pursuit of logs for cabins and outbuildings. On these long walks we observed the various animal tracks and made speculative guesses on their various habits.

By the second full year on the lake we had acquired a handful of small traps and a dozen or so snares; a membership in the Alaska Trapper's Association so we could glean information from the newsletters; and a trapping license. After moose season we dragged out the old issues of Fur-Fish and Game a friend from Massachusetts had hauled out of his attic and sent home with us after a trip East the previous summer. We also started scouting for sign. I found where the visiting fox had been traveling through the willows and had left a container stolen from the jays I was feeding the last winter.

That was where I hung my first snare. That red fox didn't suspect a thing as he stole through the willow to see what I might have left on our porch for the jays! Bouyed by my beginner's luck I marched up the trail behind the cabin toward a pond that in the summer had served as a nesting ground for a snipe, common loon and tern family. Just before I crested the hill, I found another perfect spot for a snare. Two small willows crowded each side of a natural animal trail and stuck out over the path worn into the snow. "Not much to anchor to," I mused. "But otherwise, it's perfect. Besides, foxes are small and snares are lethal." So I blithely tied the snare off to the base of the little willow and wrapped it around a couple more for good measure.

The next morning it was snowing and cold AND we were out of bread so I baked and took care of indoor chores. So the next day there was puffy snow as I eagerly walked up back to check out my snare. On the way I noticed a very strange track that appeared to be coming down the hill and turned off the main trail before it reached our cabin. The puffy snow made it difficult to see any distinct paw prints and the accompanying scallop design on the snow reminded me of an otter's sliding gait but somehow wasn't right for that either. Arriving at the set I suddenly realized I should have followed that strange track when it left the trail behind the cabin. The willows were ALL gone as was the snare. All that was left was a flattened catch circle!

Back down the hill I went, back up the hill through thick brush and deep snow pausing to watch for a furry critter wearing a necklace that would hopefully be caught in the next really thick brushy area. After an hour of struggling I was back to the frozen pond and a vast open meadow area.

Giving up for the moment, I hit the trail and went back home for a husband and snowmobile. Another hour and several miles later we finally decided that the fox wold have to deal with it's necklace on its own.

I set out a few more snares that year with no results. In the meantime, I the .22 rifle and moonlight much more effective at reducing the fox population that had been eating so many ptarmigan in the area. Thanks to a University of Alaska Cooperative Extension Service bulletin on home tanning and an Extension Service skin sewing workshop taught years ago by Myrtle Bang, those silver, cross and red fox pelts all became beautiful trapper hats and mitts.

The next two years I concentrated more on marten and left the canids to my husband. But then I found a large piece of driftwood washed up on the beach near the cabin. During moose season this year I stopped and tipped it up to form an 8 foot tall decorative natural sculpture. The more I looked at that old water washed root the more I thought it would make an excellent pee post set for fox. The only problem was the absence of fox tracks in the area.

Finally, right before Christmas I looked out the window to see a red fox in the back yard. Exploration showed enough prints to look like a puppy yard so I put out three snares in the bushes and had my husband coach me through the pee post set at the driftwood sculpture 200 yards from the cabin.

The very next morning as I headed out on the snowmobile to pull my marten traps from the nearby area, there was a beautiful red fox sitting on the snow drift above the driftwood. It was caught firmly in a Bridger #3. Here we go again! Another stroke of beginner's luck. It MUST be easy, right? I think I'll try wolves next...