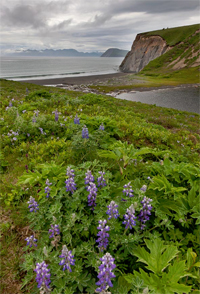 From the ATA Archives: Summer Trapping in Alaskan Burns
by Karin Lehmkuhl

I looked up from the trap I had been checking to find I was being watched. The sable brown marten studied me carefully from a tree not ten feet from where I stood. I held my breath as he slipped away, leaping gracefully over logs and onto snags. Perhaps the marten was pleased my traps were not set for him. In fact, this summer he and I had the same job. Catching voles!

Marten like the one I had just seen get quite a meal when they catch the voles I was getting in my traps. But I cannot report on the palatability of yellow-cheeked voles - when I caught them I tagged them, weighed them, and let them go. I guess I'd make a pretty poor predator!

From snowmelt to snowfall this year I could be found traipsing around yellow-cheeked vole colonies: watching for the telltale network of runways and burrows, listening to the rodents' high-pitched whistles, and fighting off hordes of mosquitoes! Yellow-cheeked voles, which look like miniature marmots (or big mice with short tails), are among Alaska's largest small mammals. Not surprisingly, they can be identified by the yellow-orange patches on their cheeks. They seem to crop up unpredictably, with colonies appearing in all sorts of strange places. What are they looking for when they set up house? This is one of the mysteries that I was trying to unravel this summer with the help of the U.S. Fish and Wildlife Service. In general yellow-cheeks seem to prefer stream and river edges, mossy lake edges, and burns. The voles I sought this summer were those hanging out in burned areas. I wanted to find out what makes a good home for these critters.

The marten and weasels I saw in the burns this summer were one step ahead of me. They had already figured out where the yellow-cheeked voles live, and had come to catch a hefty snack. It was quite a sight to watch marten in the midst of charcoal black trees. Trappers often wonder what will happen if their trapline burns. Will there still be marten there or will they leave when the spruce are nothing but grey snags? Surprisingly enough, some marten flourish in recent burns - and yellow-cheeked voles may be one reason why. It's like finding teenagers at a hamburger stand: If we can figure out where the marten food is, we will have better ideas of where to find marten!

If you are out looking for marten this winter, enjoy the woods for me! My trapping season is over, and its time to sit down with all the information I gathered and make sense of it. I'll let you know what I find! Happy trapping - and if you run across a little fellow with yellow cheeks, say hello from me!

P.S. - The voles and I thank the Alaska Trappers Association for generous support of this project. The scholarship money I received is going toward vole-sized Sherman live traps. When you put your traps away this spring, I will be dusting mine off for another go!