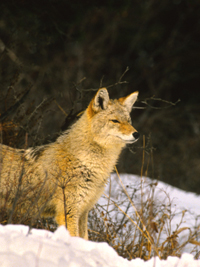 From the ATA Archives: Research Trapper for a Day
by Mike Chapin

It was a beautiful spring day on the Kenai Peninsula, the leaves were out and everything was greening up fast. Mosquitoes were plentiful. In t-shirt and shorts, I was on the wolf trapline again - in May?!

You're probably thinking, "why trap wolves in May - the pelts can't be any good, the hair is falling out in gobs by now, and where is that 1-800-TIP number so I can get that $1,000 reward?" One more thought may cross your mind if you're familiar with the wolves of the Kenai area... "Besides poor fur in May, don't those Kenai wolves have some sort of lice problem?!"

That's where the "research" comes in. The day started out with me getting the proper license - requiring me to fill out some papers stating that I was a volunteer U.S. Fish and Wildlife employee for a day. (Sorry, no $1,000 reward for that tip.) Then we loaded up and headed out of town in a perfect trapping rig. It was a full-sized 3/4-ton Chevy diesel and camo color to boot!

There's nothing quite like the feeling of bouncing down the trail in a truck that has less suspension than a 1970 Elan snow machine. You gotta love it! The back of the truck had all the traps - No. 7 LPC's with padded jaws, seven feet of chain, and a grapple hook drag. All this was packed in boxes with spruce boughs layered to help prevent contamination. Also in the back were the usual tools of a dirt trapper - trowel, rake, sifters, broom, bucket, and of course, the baggies of scat.

A large portion of the front seat was taken up by the "wolf kit," which had everything needed to dart, radio color, weigh, measure, ear tag, and take biological samples for DNA and general blood testing. The kit contained something to delouse the wolves, vitamin supplement, and antibiotics in case of foot damage as well. In case of bears, the mandatory protection of choice, a firearm, also rode in the front seat. In this ase, a pre-'64 model 70 Winchester 30.06.

My guide for the day, Liz Jozwiak, a Research Trapper for Kenai National Wildlife Refuge, had to qualify with the gun every year on the range. They have a charging bear target - for more realistic practice. Anyway, the trapline I was volunteering on is "claimed" by Liz, who, by the time this is in print, will probably have her master's degree in wolf management.

We all know how defensive and territorial trappers can be about their lines; as we headed out of town, Liz blindfolded me! After several turns with no peeking, I may not have been lost, but finding my own way home wasn't going to happen.

We got to the first set, a scent post. No luck. On to the next, another scent post with the same results, and another, and another, all waiting to pinch the toes of a wolf. No lure sets? No blind sets? No way!

Liz uses the scent post set almost exclusively because non-target catches are frowned on. Non-target species like the black bear, brown bear, eagle, raven, caribou and moose far out-number wolves. Nobody in their right mind wants to get to a set only to find a brown bear cub with pinched toes and a mad momma nearby. This is almost like trapping with one hand tied behind your back!

Of course, wolf trapping in May should be pretty easy - the competition had to hang up their gear more than a month ago. The wolves have a lice problem so the pelt has little value, and most trappers won't go ten feet out of their way to try and catch a wolf. As a result, the wolves have had little experience with traps, even though it was right after the regular season.

Liz's trapping is part of an ongoing monitoring project on the Kenai National Wildlife Refuge to observe pack movements and maintain contact with the packs in the area. We finished checking the rest of the line; the only luck of the day was at the eighth set where a coyote had worked the set, leaving only his tracks.

With the traps checked, it was time to lay more steel. We scouted out more locations, and I watched as Liz made her "patented" scat on a rock set. Quietly observing and taking notes, I couldn't help blurting, "Snap!" when her fingers were near the pan.

With the traps checked, it was time to lay more steel. We scouted out more locations, and I watched as Liz made her "patented" scat on a rock set. Quietly observing and taking notes, I couldn't help blurting, "Snap!" when her fingers were near the pan.

While scouting for more set locations, we saw a lot of coyote tracks, but only one set of wolf tracks. The Kenai Peninsula has a very abundant moose population. It seemed like we saw moose on every corner, and their tracks were everywhere. At one point, we could see where a large black bear had ambled down the trail.

In my experience, that's more or less a typical day of wolf trapping; wolves have a large home range so it takes a while for them to make the circuit and return to where the sets are. By 4 p.m. it was time to head back to headquarters. The sets were ready, just add wolves.